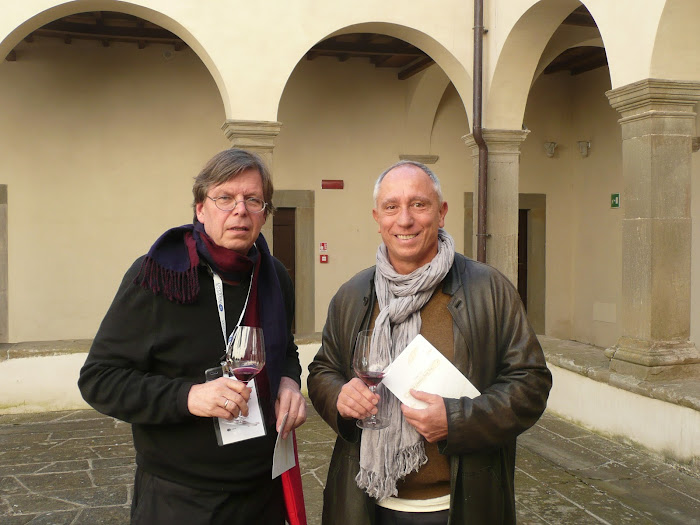 While in Tuscany, I dined and wined (1) with the Chianti Classico Wine Consortium at the Santa Maria Al Prato Convent in Radda in Chianti, at (2) Badia al Coltibuono, at (3) Castello di Brolio, where Bettino Ricasoli came up with the original Chianti Classico blend, at (4) Castello di Ama, where we saw an amazing Contemporary Art Collection, at (5) Vignemaggio, where Leonardo da Vinci’s Mona Lisa was borne, at (6) Dario Cecchini’s Solo Cicca Restaurant in Panzano and (7) at Caparasa, with Chianti Classico niche wine producer Paolo Cianferoni.

The couple of hours we spent at Castello di Ama were very special in so far as the focus of the winery visit was on the fantastic art collection of the winery, while the Castillo di Ama wines took a back seat. We also were able to get a glimpse of the vino santo production process. I had met the winemaker and co-owner of Castello di Ama, Marco Pallanti, right at the beginning of the Chianti Classico trip as he received us in his capacity of Chairman of the Chianti Classico Consortium.

The Chianti Classico region covers an area of approximate 100 square miles between the city of Florence in the north and the city of Siena in the south.

Historically, the Chianti Classico zone is where the production of Chianti started. In 1716, Cosimo III de’ Medici, Grand Duke of Tuscany, issued an edict legislating that the 3 villages of the Lega del Chianti, the village of Greve and a 2 mile hillside north of Greve as the only officially recognized producers of Chianti. This delineation existed until the 1930s when the Italian Government expanded the zone. Subsequent expansions throughout the twentieth century would bring the Chianti zone to cover almost all of Tuscany. The original zone of the edict of Cosimo III de’ Medici would eventually be considered the heart of the Chianti Classico region. 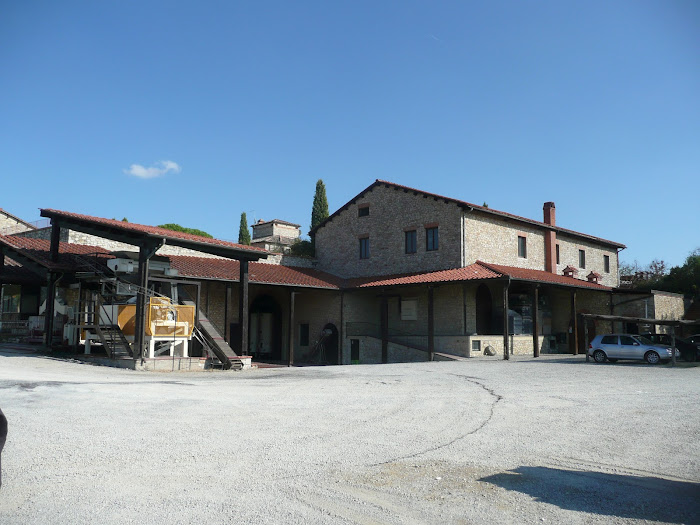 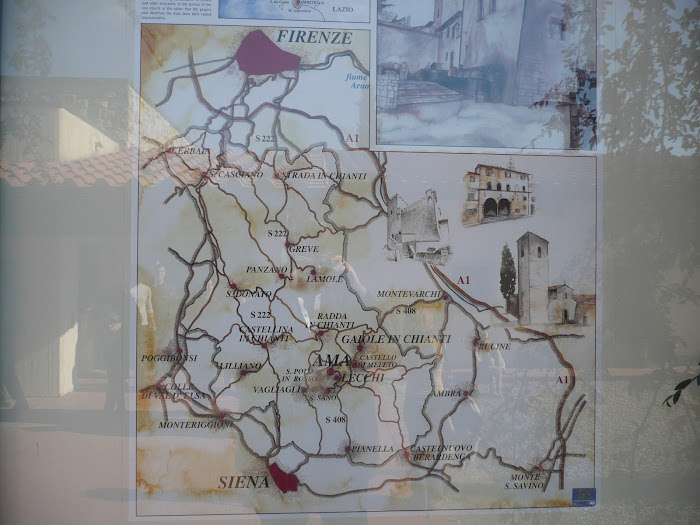 The Chianti Classico zone is a truly unending source of culture, scenery, architecture, gastronomy and wines. Here lie the lines of defense of the two Republics, Siena and Florence, which have scowled at each other through its woods and vineyards for centuries. Interspersed with the countryside are castles: some are still occupied by the noble families whose ancestors built them in the feudal middle ages; others – ruined, perhaps in battle centuries ago, and abandoned – still dominate their hilltops with proud arrogance. There are numerous hill towns and hamlets, villas and farmhouses, guarded by sentinel cypresses, by people who may make their living tending the vineyards, or have already made more than a living and have retired to beautiful old houses. Be aware that the British, German, Dutch, Swiss, French and Hong Kong have bought up much of the Tuscan landscape. They too have become wine makers with a vengeance.

Sangiovese – the Soul of Chianti

Sangiovese is the signature grape of Chianti. It is the soul of Chianti wine. The Sangiovese grape, like the Pinot Noir, is not an easy grape variety, but has the potential of producing world class wines. 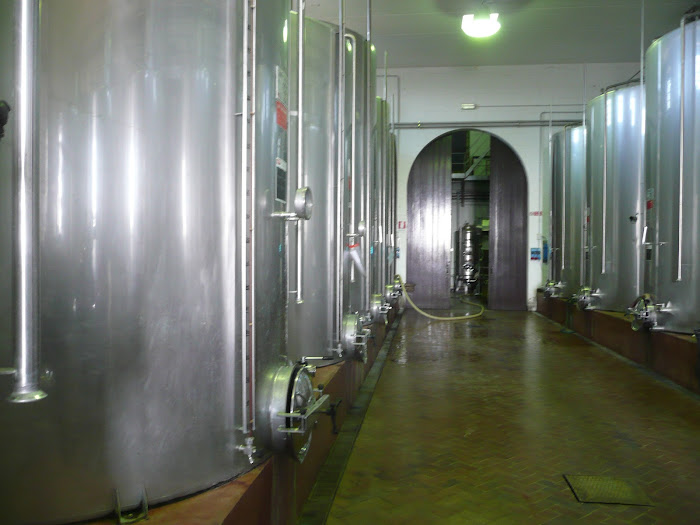 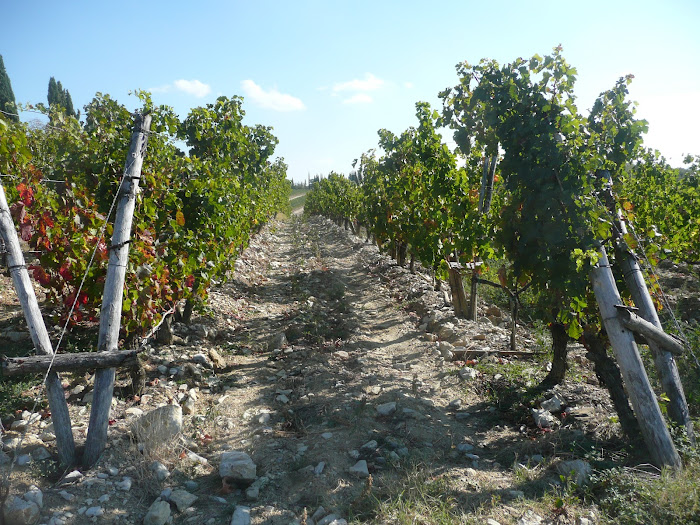 Since 2006, the use of white grape varieties such as Malvasia and Trebbiano has been prohibited in Chianti Classico. The share of Sangiovese can range from 80% to up to 100%, with the remainder either other native red grapes, like Canaiolo and Colorino, or international varieties, such as Cabernet Sauvignon and Merlot. Wines that do not comply with these rules – of which we tasted a number during the trip – cannot be sold as Chianti Classico, though produced in the same area.

Castello di Ama is one of Tuscany’s pre-eminent wine estates, located in Ama, which is a small hamlet nestled among gentle hills, in the commune of Gaiole in Chianti, located 15 miles northeast of Siena. Castello di Ama currently comprises some 250 hectares, of which 90 are in vines and 40 in olives trees. Annual production – exclusively from the estate vineyards – amounts to about 300-350,000 bottles. 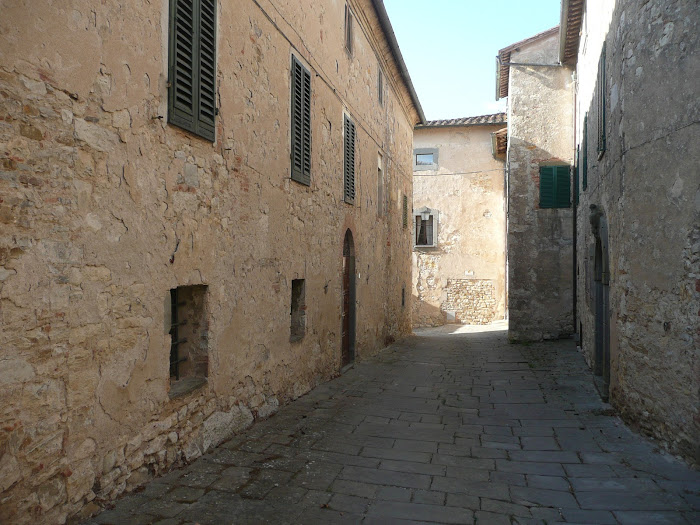 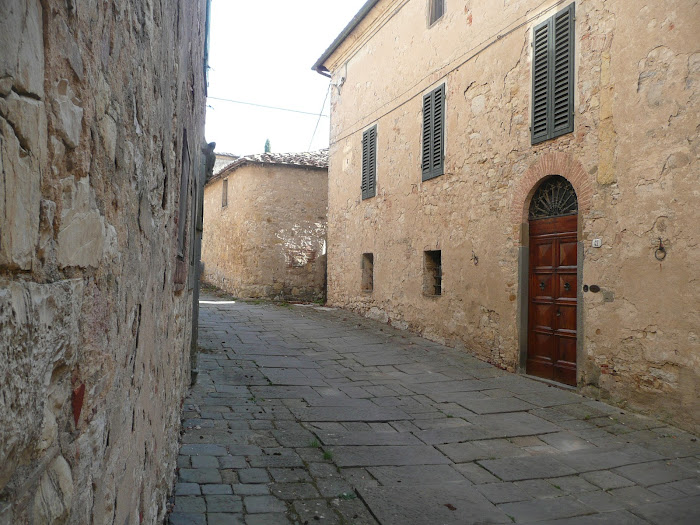 Lorenza’s parents, jointly with 3 other families, bought Ama in 1972. When Lorenza’s family bought the property, it did not look as good. Ama, then owned by absentee landlords in Siena, was left in neglect. The 4 families bought the place because they liked it, for a very good price. Then, they recognized that there was an opportunity to restart a great wine tradition and hired Marco Pallanti, who came on board in 1982.

Marco grew up in Florence, where he studied agricultural engineering. He started at Castello di Ama as winemaker right before the harvest in 1982. Lorenza began working at the winery six years later and became general manager in 1993. The couple now owns Ama together. Marco and Lorenza have 3 children.

Over the years, Marco Pallanti has become one of the most respected wine makers in Tuscany. In 2003, he was Gambero Rosso’s Guida Vini d’Italia Oenologist of the Year. Since 2006, he has been President of the Consorzio Vino Chianti Classico (see below).

Right from the beginning, Marco did extensive research with a view of introducing new training systems, improving clonal selection, and above all singling out the best vineyard plots for the traditional Sangiovese grapes as well as international grape varieties. Over the five years 1982-1987, some 50,000 vines were grafted over.

Another important area was looking for new methods of training the vines, all with the goal of improving fruit ripeness. In 1982, and for the first time in Italy, vines were grown with the foliage trained into V-shaped vertical canopies, known as the open lyre system, the result of trials in France for low-density vineyards.

Touring the Winery: Art and Wine

In 2000, Marco and Lorenza started the Castello di Ama for Contemporary Art project. Every year they have commissioned a modern artist from a different nation to come to Ama to design an installation. The piece must somehow integrate with the landscape or architecture of Ama itself, blending the modern and historic. Here are some of the art works which I found in particular interesting

French artist Daniel Buren built the wall of mirrors in 2001, placing a picture window–sized opening every few feet to allow people to look out onto the vineyards. 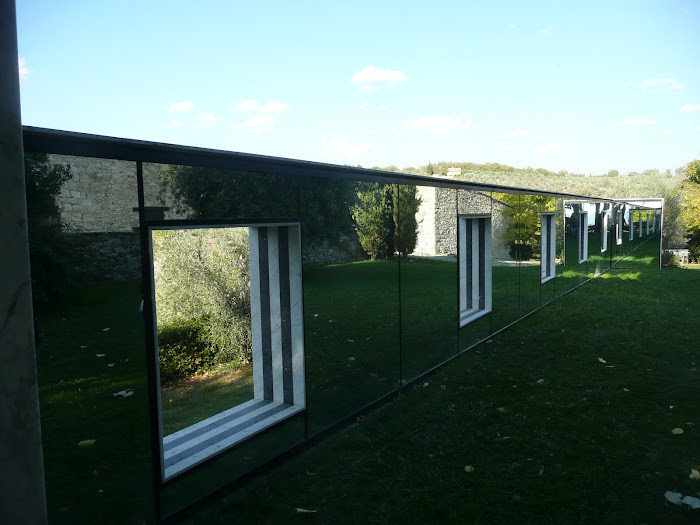 In 2003, South African artist Kendell Geers placed neon letters spelling NOITULOVER— “revolution” spelled backward—on the far wall of an ancient stone cellar underneath the house that is used as a barrel room. 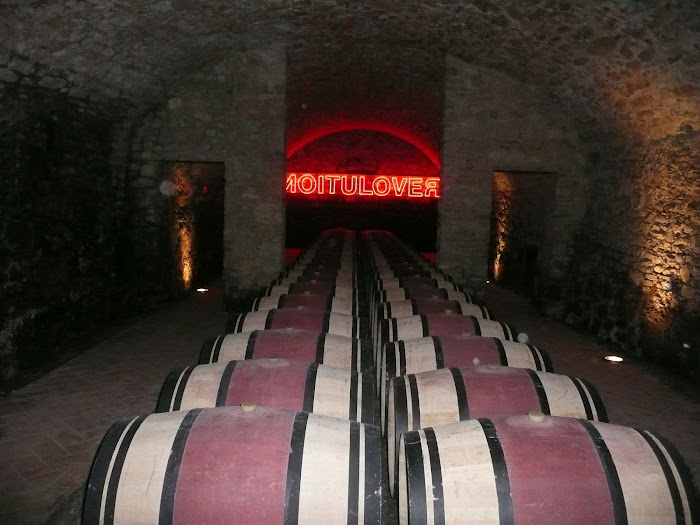 One of the constants in the work of Anish Kapoor is the creation of openings on the crust of the world. Interestingly, whne you stand in fron tof it, the void inside that is perceived as surface. 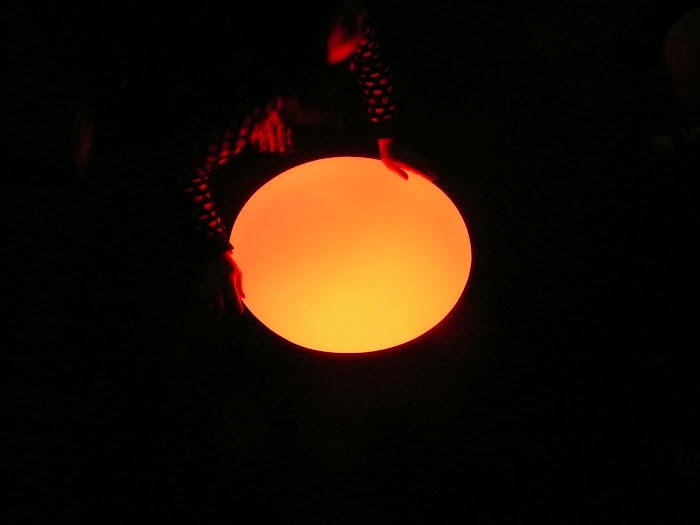 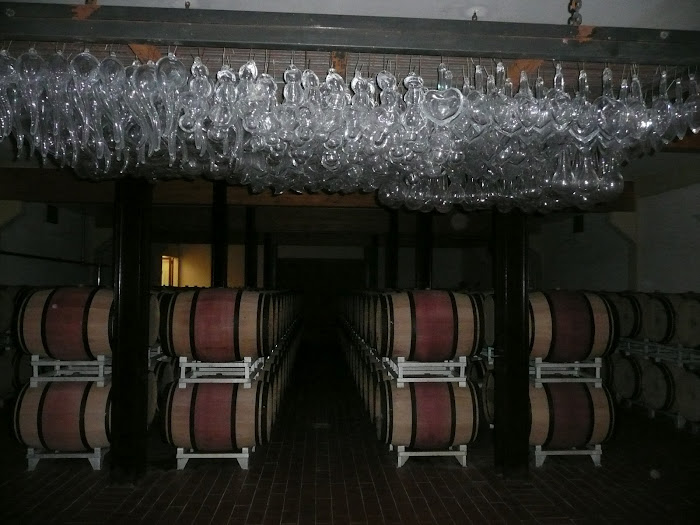 2006: CARLOS GARAICOA Yo no quiero ver más a mis vecinos

An installation of different walls by the Cuban artist Carlos Garaicoa. 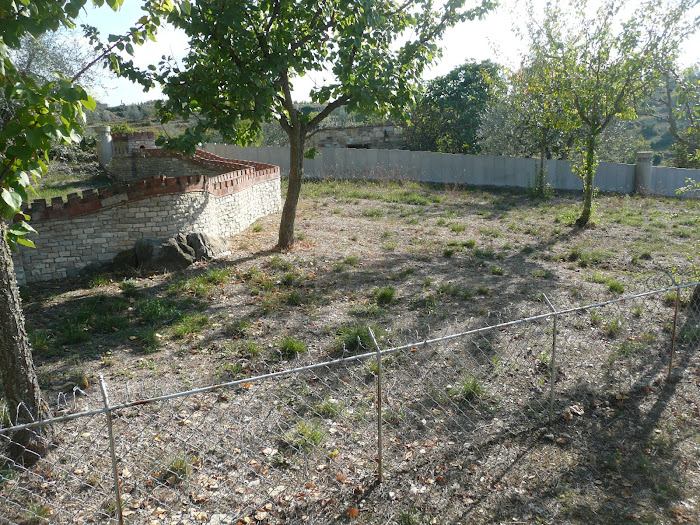 2008: CRISTINA IGLESIAS Towards the Ground 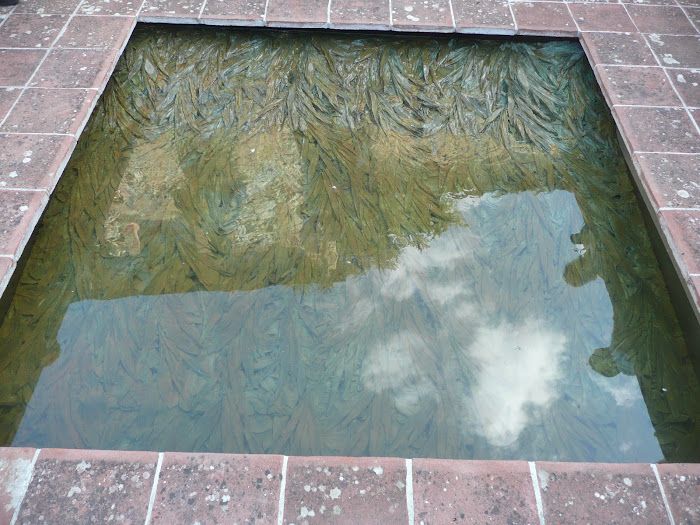 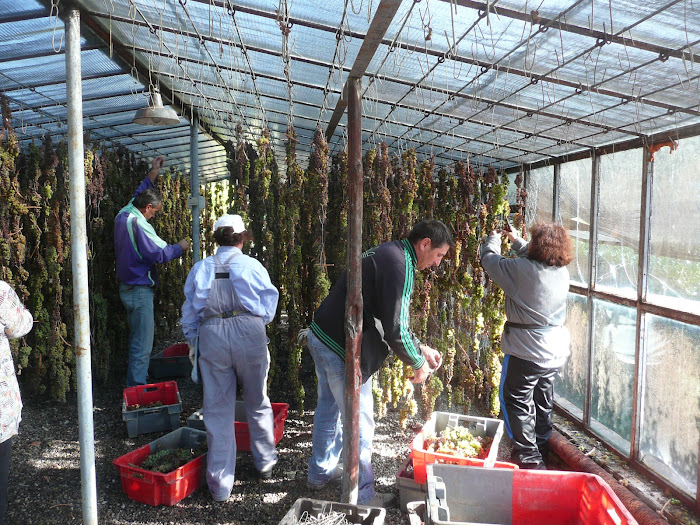 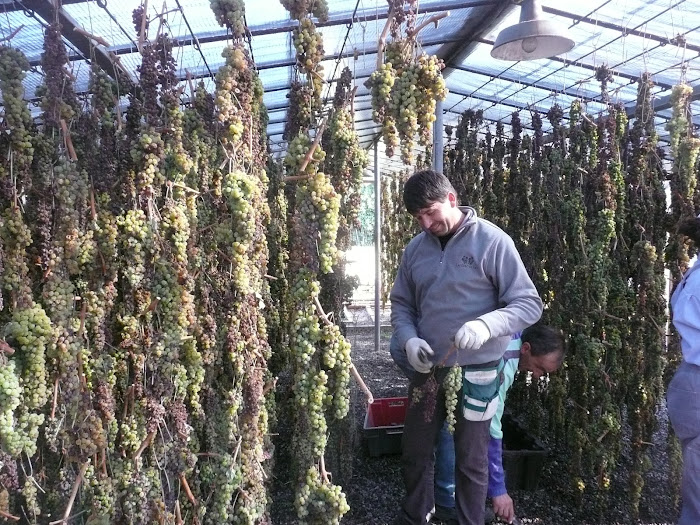 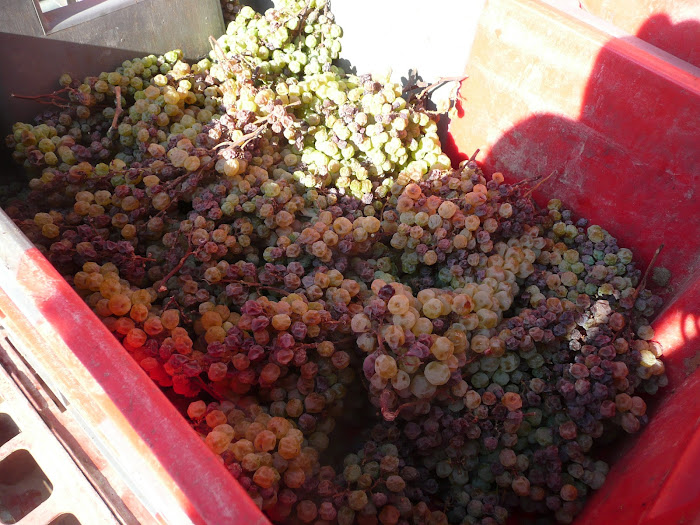 While Tuscany is not the only Italian region to make the passito dessert wine, Vin Santo (meaning “holy wine”), the Tuscan versions of the wine, are well regarded and sought for by wine consumers. The best-known version is from the Chianti Classico and is produced with a blend of Trebbiano and Malvasia Bianca. When we visited Castello di Ama, they were just in the process of taking down the dried grapes in order to start the fermentation process.

The grapes that produce this Vin Santo were selected from the best Malvasia Bianca and Trebbiano fruit from a total area of about 5 hectares in the Bellavista, Casuccia, and Bertinga vineyards. No more than 1-2 clusters per vine are suitable for producing this wine; such rigorous standards are necessary to ensure absolutely healthy, fully ripe grapes. Transportation in shallow boxes means that no grapes are broken open on their way to the drying-lofts.

The Wines we Tasted 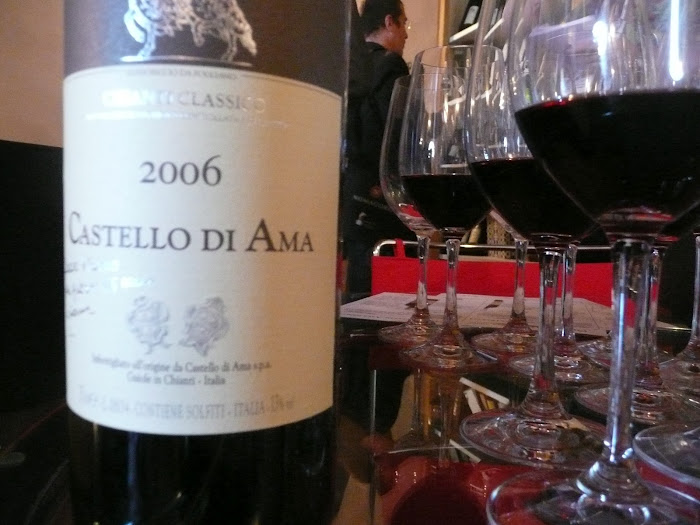 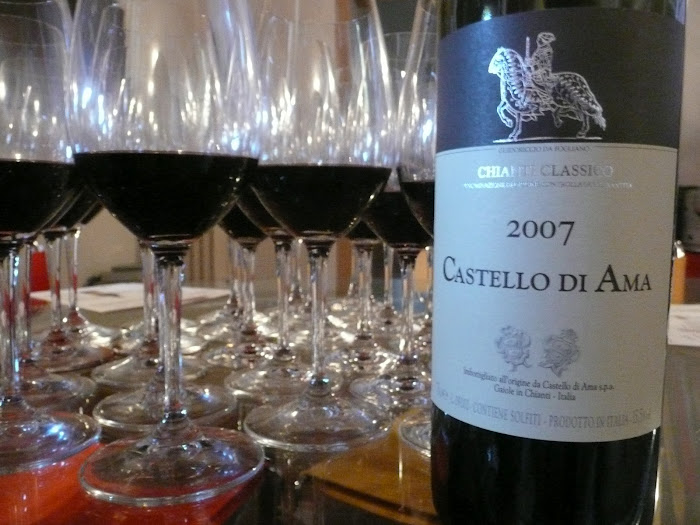 President of the Chianti Classico Consortium

We did not meet Marco Pallanti at Castello di Ama, but – at the beginning of our tour – in Radda in Chianti at the Santa Maria al Prato Convent. This is the future welcome center of the Chianti Classico Wine Consortium. Marco Pallanti is the current President of the Chianti Classico Wine Consortium and he received the group in this capacity at the Santa al Prato Convent. 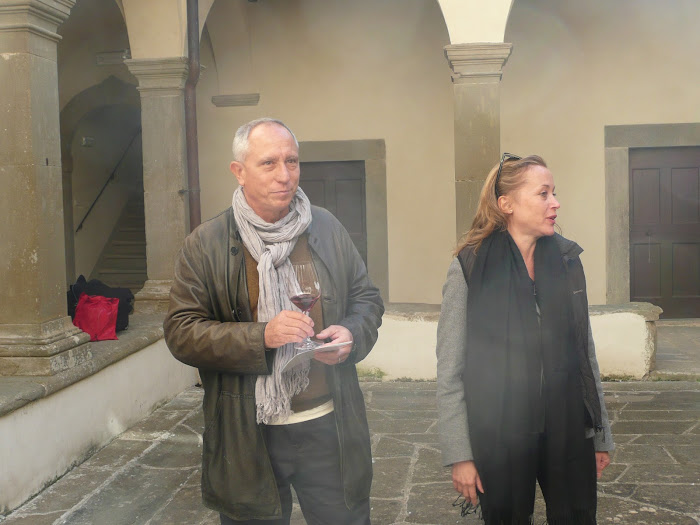 The Chianti Classico Consortium – the first of Italy’s grape-grower/winemaker consortia – was established in 1924, when a group of 33 producers gathered in Radda in Chianti to create a consortium to protect Chianti wine and its trademark of origin. A first important step in this direction was the 1932 ministerial decree that identified seven distinct zones of Chianti wine production: the wine made within Chianti’s geographical borders was permitted to use the adjective Classico to distinguish it from the others. This concession acknowledged the wine’s territoriality, origin and primogeniture well before the denomination system was introduced. From that moment on, Classico meant “the first” or “the original.” Another milestone was reached in 1967 with the approval of a decree recognizing a single Denominazione di Origine Controllata (DOC) for Chianti, within which Classico was regulated as a wine with more selective characteristics. Finally, concluding a 70-year legal itinerary, a ministerial decree in 1996 gave Chianti Classico its own DOCG, with production regulations different from those for Chianti wine. Since then Chianti and Chianti Classico have been two separate denominations, with different regulations and production zones.

We appreciate the knowledge of wine expert, Christian Schiller. He really knows great wine. We want to share his knowledge with our audience.

I grew up in New England spending part of my summer vacation on the Atlantic coast each year. Whether we traveled to Maine or to 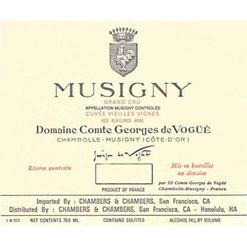